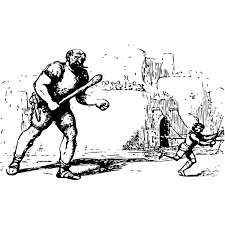 The sound of a loud crash had disrupted my slumber and I rolled off the couch instantly.

“Ugh. What was that noise?” I mumbled to myself under my breath. I was exhausted and still half asleep by this time. Finally, I pulled myself from the ground and stumbled my way into the kitchen. Then I peered through the window to see what on earth could have made such a sound, and my mouth dropped open once I saw what had happened.

As the daylight shone perfectly clear through the window, I knew for a fact that I was not imagining things. When I peered through the window, I saw a giant as tall as a skyscraper. He was humongous and moved like he was walking over pins and needles, his arms swayed side to side, and his face appeared hard and as cold as stone. I froze at once by the window, I wanted to move before he saw me peeking, but my legs had given up, as they were completely numb. All I wanted to do at this moment was to run and seek sanction under the comfort of my bed. However, I couldn’t, because my fear was keeping me stuck at this moment. “Welp,” I sighed to myself. “I guess this is the end for me.” I was already accepting my fate; I knew that this giant would destroy me and everyone else in this town without a second thought.

‘’Ha,” I chuckled. “Well at least I know now what the noise was.’’ Fortunately, I am always able to have a sense of humor, even in the darkest moments. What was especially humorous to me was that when I had first glanced at this giant, I forgot all about the noise. I had now come to the realization that the loud crash that woke me out of my slumber was the aftermath of my neighbor’s reaction to this malignant giant. When this happened, he was probably so struck with fear that a cold tingling had rushed throughout his body while he was in his car leaving for work. I was not paying much attention to my neighbor after that. All I knew was when I was looking out the window, I saw his car crash into the garage across from his home. My mind had started to wander off into space, partly because I was still distracted by what had just happened to my neighbor.

Suddenly, I heard a loud smash approaching my house, as the giant was coming closer and closer. “Ahhhh! Nooooo!” I shrieked fearfully at the top of my lungs. There was not enough time to run out of my house; all I could do now was hope for the best. The giant had arrived in front of my house, his red and beady eyes encountered my tearful eyes. He took out his right arm and ripped off the roof of my home. I was completely and utterly horrified. Then, he took out his left arm and reached into the house to grab me, but before he could, I passed out and hit my head on the ground. I felt as if I was falling into nothingness, like it was an abyss. All I remember was the darkness. Eventually I regained consciousness, and I jumped up instantly once I had opened my eyes. I breathed heavily as I panted to myself. “Ah, it was just a wild dream. It was just a dream.”